Right now I am living deep inside a real big chilly. It’s something like -42 C or whatever. When it’s that cold, does it matter any more? I don’t even check. It’s -40, yada yada. 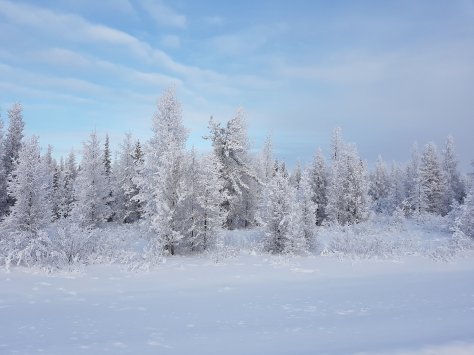 Up until recently, it’s been fairly easy to live with.

But … there’s always something.

First, my truck wouldn’t start. It was plugged in, but despite heat shots and trickle chargers and a couple of boosts, it protested and said no, I’m not starting. Now leave me alone or put me in a warm garage!

There I was, my whatis sticking up in the wind chill factor while I fussed over an exposed engine, checking oil and fumbling around trying to determine if the the block heater was still working as I invented a totally new dialect composed entirely of vulgarities.

Then my bathtub drain froze.

I was standing in the tub shower, soaping up and enjoying the warmth when I realised that the water was up to my ankles. It wasn’t a clog, because the day before, the water was draining normally.

But now? There’s no movement at all, not even a trickle.

I have a bathtub full of used water and an open drain. It just sits there, staring stupidly at me while I think about flamethrowers and other incendiary devices.

Then my house door wouldn’t lock. It was too cold for the tumblers to engage. I almost got down on my knees and begged. Really? You aren’t going to lock? Just hang on a sec, I have to go throw a minor tantrum. Waaahh! 🤣

And let’s not forget the head cold. Its onset blended seamlessly with the arrival of several days of major meetings that I had to attend, a tissue box under one arm and a Vicks inhaler lodged, unnoticed, in a nostril.

Of course, all of this happened while my M is away. (Is there a message in that?)

I got my truck towed. It got its wish and is in warm garage awaiting a new block heater.

I awoke in the middle of the night to the sound of my bathtub draining. It turns out that all I had to do was wait. Scared the crap out of me though – there I was, creeping into the bathroom with my phone in one hand and a fly swatter in the other. If it had been an intruder, what was I going to do with the fly swatter??? (Oh look, there’s a mutant mosquito in the bathroom – hand me the swatter please.)

I got my hair dryer, pointed it at my door lock and warmed up all the parts.

My cold is almost gone. So is a lot of the other cold.

Things are looking up, especially the temperature. (Okay, I’ll stop with the cheesy comments.)

So how has this “polar vortex” (doesn’t that sound like the name of a disaster movie? Polar Vortex, starring Jennifer Aniston and Tom Cruise. Watch if you dare. Because you may never go outside again. 《Sound of loud chattering teeth.》) been treating you??? Among other places, it has hit the west coast of the continent pretty hard.

26 thoughts on “The Big Chilly”